LOONA Premier Greeting: Line & Up was a series of official fan-events occurring between the Seoul and Busan showings of LOOΠΔ Cinema Theory: Up & Line. They took place on June 2 (Sat) 6PM and June 3 (Sun) 6PM (KST) at YES24 Live Hall.

The debut of the first girl on October 5th 2016 and the debut of the twelfth girl on 30th March 2018. The 12 girls who has gathered within the span of 524 days will be introduced to everyone for the first time. 12 girls' story and the units will be waiting for everyone.[1] 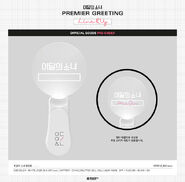 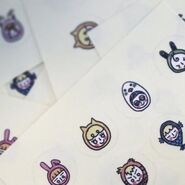 In addition to the items shown in the first two images above, attendees who had registered on LOONA's fancafe prior to the event would be given a set of 12 stickers designed by HeeJin[2][3], which featured designs of each member and their representative animal.