Other than the Music Videos, Teasers, and Cinema Theories, there are some other pieces of the lore that Blockberry Creative has scattered throughout the internet for Orbits to find. This page lists minor theories.

As we know from the name LOONA, the group coincides with the moon. LOONA is pronounced the same as the Spanish word Luna, meaning moon. And as we have seen the moon is an important symbol to LOONA. From the official logo showing the phases of the moon to teaser photos to album covers centered around the moon, and even songs such as Eclipse or Satellite. The idea of the universe and space plays heavily into LOONA's concept, with the moon at the center of it. 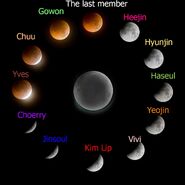 This theory is used to predict each comeback pattern.

The Three Planes of the LOONAVERSE[]

Each sub-unit of LOONA lives in a "plane" of the LOONAVERSE. These are essentially different dimensions within the universe, and are also the three planes of the möbius strip (As discussed above).

The first plane is titled "earth" and is where 1/3 is located. This can also be seen from the fact that each member represents a different part of the world, with HeeJin in Paris, HyunJin in Japan, HaSeul in Iceland, and ViVi in Hong Kong. Most people consider them to be at the bottom of the LOONAVERSE, since they are the foundation for the rest of LOONA. Many believe that they also represent the light, or the pure side of the möbius strip. The second plane, or the middle plane is where ODD EYE CIRCLE live, and is commonly called the "middle plane", "middle earth", or even "the cosmos". Each of them have superpowers, with Kim Lip's super speed, JinSoul's teleportation, and Choerry's "plane switching". In Choerry's case, this means that she can travel between the dimensions of the LOONAVERSE, using mirrors (as seen in Love Cherry Motion). There have also been theories that JinSoul can travel between dimensions as well, since her ability is teleportation, and she is seen in the 1/3 and yyxy planes. It is believed that since they are in the middle of the three worlds, they are neither light nor dark, but inbetween.

The third and final plane is the plane yyxy inhabits, titled "Edenism", or simply, "Eden". Each member of yyxy has a representative fruit and a complex relationship with the other members of their subunit, as explained above. They are also considered to be the dark side of the möbius strip, and (as mentioned in the analysis of the love4eva music video) eat their fruit to gain enlightenment, and fall from Eden. (More of this topic is discussed under Cultural References.) Some believe that since Eden is at the highest point in the LOONAVERSE they have the most knowledge about the other planes and the other members, but this has yet to be confirmed.[1]

JinSoul having two, (blue & black), Choerry only has one? (purple & white)

The Borders of Music Videos[]

When fans visited the http://dlrowehtanool.com/ site during the yyxy members' promotions, the website appeared to be nothing more than a gif of a spinning DNA strand, with the title "mobius" as the name of the page.

This further confirms the theory that the möbius strip is an important part of the LOONAVERSE. Fans have begun to call this gif the "Eden DNA" since yyxy's concept is new DNA, and their location is Eden.[2] It is officially called a Neoanthropinae gene, as stated in the "love4eva" music video description. The website was shut down after yyxy finished promoting beauty&thebeat.

Birbfriend theorizes that the names of the members are the key to which members of yyxy represent which parts of the DNA. "Commonly when talking about DNA, the four nitrogen bases are shortened to abbreviating letters in order to simplify a long and complicated DNA strand. They are shortened into A, G, C, and T." According to her, based on the members' names, the nucleotides would represent as follows:

A user by the name of missdesudesu on tumblr managed to pull 12 colors out of the Eden DNA. Though they did not expand on this idea, Birbfriend interpreted the 12 colors as the representative colors of the LOONA members, as shown below.

Reddit user Bragen (aka loonaretheworld) took the idea of the connection between yyxy's chromosome and the Eden DNA a step further with their hypothesis.[3]

As part of the Reverse Order Theory, every member of the LOONAVERSE has a counterpart, but only a select few are truly mirrored, these being the members of yyxy and LOONA 1/3.

If we look at Chuu and YeoJin, they share many similarities. Both represent child-like characters, that struggle with the aspect of love. We can see that Yves was trying to create Chuu to be a copy of YeoJin for yyxy, but due to them being on different planes of the same universe, with Chuu being on the darker side and YeoJin on the lighter, we see that YeoJin is truly a more child-like character, while Chuu is a replica with a sinister twist. Even though Chuu may be oblivious to it, Yves uses her like a pawn in order to do her bidding, while Chuu is under the impression that it is just Yves showing her love for Chuu. In the case of YeoJin, we see the other members of 1/3 caring for her in a motherly fashion, with HyunJin's gifts, HeeJin's love, and HaSeul's motherly touch.

The second main part of the mirrored girls are HaSeul and Go Won. Both members of LOONA struggle with a similar dilemma, having a cold icy heart and having to find themselves and give into love in order to truly become members of LOONA. In HaSeul's case, HyunJin pushes her to choose between peace or truth. She decides truth, and therefore loses YeoJin in the process. With Go Won, we see her trying to block out the members of yyxy, until she gives into their love, specifically Yves'. The interesting thing is that with both girls' situations, both Yves and HyunJin were coming from places of love and care, which differs drastically from the situation between their feelings for Chuu and YeoJin.

The chess theory is based off of LOONA's individual teasers for X X.[4]

As shown through the music videos, not every member of the LOONAVERSE has the power or ambition that others do. This shows an imbalance of capabilities.

We can assume that Olivia and Yves are not powerful enough to takedown HeeJin on her own, and therefore requires the help of other girls in the LOONAVERSE.

In the first few seconds of the music videos for Kiss Later, Love & Live, Rain 15db, Eclipse, Girl Front, and Butterfly we hear the same clip of birds chirping.

In dance covers, the moon goes to right instead of left showing us that this doesn't connect to the LOONAVERSE, but instead our world. This also tells us that the entirety of the LOONAVERSE mirrors our world just as Earth Mirrors Eden, Choerry mirrors HyunJin, and so forth.

The Day and Night Units[]

The Day and the Night Units were first theorized during teasers for LOONA's debut, when six of the members' teasers were released at 12am (KST) and six were released at 12pm (KST). This was later confirmed when the photocards for the limited edition B of + + was either of the "Day Unit" or the "Night Unit".

As seen based on the teasers, some of the members wear black clothing and some wear white, pointing to the idea of two opposing chess teams, one being the white unit and one being the black unit, or the day and the night.[6][7][8][9][10][11]

The chess units are as follows:

The Up & Line Units were featured as photocards for X X Limited A. The Units go as follows: