–Who's Next Girl? Teaser

HyunJin (Hangul: 현진) is the second revealed character of the LOONAVERSE. She lives on Earth along with HeeJin, HaSeul, YeoJin, and ViVi.

Since HyunJin is a former member of ODD EYE CIRCLE and is the mirror image to Choerry, meaning that HyunJin would have Choerry's ability to teleport dimensions as well. She also has the ability to spread and mix her individual color, yellow, which is key to creating colors like orange, green, brown, and so forth.

As twinfish theorizes in Around You, even before we see the two of them meet, HyunJin is sending a letter to HeeJin, and we later see HeeJin and HyunJin meet in the music video for I'll Be There, which we are later told in the description for Love & Live that HeeJin and HyunJin met in school, and were in the same grade.

As twinfish theorizes, the yellow truck in the music video for Let Me In represents HyunJin, who brought HaSeul to the icy tundra in order for her to face her fears and decide who she truly is.

The most complex relationship we see is HyunJin's relationship with Choerry. This is one of the most popular theories to-date, and one that helps to shape the LOONAVERSE itself. As described, we know that originally ODD EYE CIRCLE was the primary colors, Yellow, Blue, and Red. We also know that HyunJin must've left the ODD EYE CIRCLE, in order to (most likely) be with her long-time friend HeeJin in 1/3. As a result, Kim Lip and JinSoul had to create a replacement, by combining their colors to create Choerry. This means that Choerry and HyunJin mirror each other, and are connected. We see teasers for this throughout the LOONAVERSE, with HaSeul and YeoJin in Love Choerry Motion, to HyunJin's appearance in Girl Front, even with the teasers for HyunJin's single and for Choerry's single, their teasers are the same, just flipped. We also see this with the color theory since yellow and purple are complimentary colors (learn more about the color theory here). (More on HyunJin and Choerry's relationship is under Love Cherry Motion and Girl Front.) 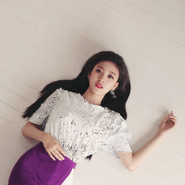 In the month of November,